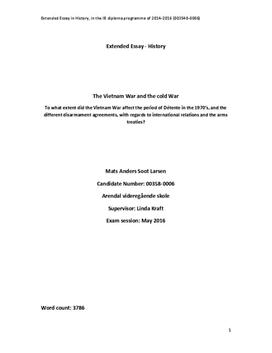 The Vietnam War and the Cold War | Essay

"The Vietnam War and the Cold War - To what extent did the Vietnam War affect the period of Détente in the 1970's, and the different disarmament agreements, with regards to international relations and the arms treaties?"

Abstract: 2
Table: 3
Introduction: 4
The Cold War: 4
The Vietnam War: 6
Sino-Soviet split: 7
SALT 1&2 and Détente: 8
BTWC: 9
American stance on the Vietnam War and its international relations: 10
The massacre of My Lai: 11
The Kent state Shooting: 11
Conclusion: 12
Bibliography: 14

Abstract:
The Vietnam War was the second proxy war fought during the cold war. The interesting part about the Vietnam War is the period in which it happened, as it happened right between one of the most intense, and one of the more relaxed periods of the Cold War. This essay will try to answer the following question. To what extent did the Vietnam War affect the period of Détente in the 1970's, and the different disarmament agreements, with regards to international relations and the arms treaties?

To answer this we must look at the initial political situation which presented itself through the course of the Cold War up until the Vietnam War. The USA and the USSR supported opposing factions in the conflict. Prior to the Vietnam War both countries came close to nuclear war during the Cuba crisis. Even with the Cuba crisis fresh in mind both the USA and the USSR pushed on each their side, which to some extent fuelled the tensions of the Cold War.

Next it is important to look at the arms limitations treaties following the war, and the development of international relations. The SALT1 and SALT2 agreements which arrived in the period of Détente which came straight after the USA pulled out of Vietnam, and later the BTWC which also came during this period. The development of the international relations such as the Sino-Soviet split, and the effect the US public had on US actions and willingness to build political bridges, and not stay isolated.

The investigation concluded that the Vietnam War to quite the extent was a source of influence on the period of Détente in the 1970's. This is argued for by how the Sino-Soviet split was further fuelled by the war, and also how extensively the war was covered.

Introduction:
The cold war was a huge arms race between the Union of Soviet Socialist Republics (USSR) and the United States of America (USA). It can be boiled down to a conflict of Ideologies, and an American fear of Communism as a world spread ideology, and an USSR desire to spread communism. The cold war caused many sleepless nights for a large number of world citizens in the period of cold war from 1946-1991. This essay will be looking at the effects of the Vietnam War, which took place after the Cuban Missile Crisis, and which was first started by the French as a result of the outcome of the previous world wars... Kjøp tilgang for å lese mer Allerede medlem? Logg inn