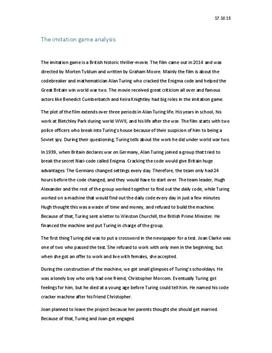 The imitation game is a British historic thriller-movie. The film came out in 2014 and was directed by Morten Tyldum and written by Graham Moore. Mainly the film is about the codebreaker and mathematician Alan Turing who cracked the Enigma code and helped the Great Britain win world war two. The movie received great criticism all over and famous actors like Benedict Cumberbatch and Keira Knightley had big roles in the imitation game.

The plot of the film extends over three periods in Alan Turing life. His years in school, his work at Bletchley Park during world WWII, and his life after the war. The film starts with two police officers who break into Turing's house because of their suspicion of him to being a Soviet spy. During their questioning, Turing tells about the work he did under world war two.

In 1939, when Britain declares war on Germany, Alan Turing joined a group that tried to break the secret Nazi-code called Enigma. Cracking the code would give Britain huge advantages. The Germans changed settings every day. Therefore, the team only had 24... Kjøp tilgang for å lese mer Allerede medlem? Logg inn