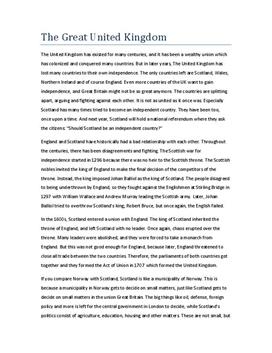 Essay on The Great United Kingdom

Answers the thesis statement; "Should Scotland be an independent country?" Since Scotland is having a national referendum asking the citizens whether it should be independent or not. Arguments for and against, facts and reflection.

The United Kingdom has existed for many centuries, and it has been a wealthy union which has colonized and conquered many countries. But in later years, The United Kingdom has lost many countries to their own independence. The only countries left are Scotland, Wales, Northern Ireland and of course England. Even more countries of the UK want to gain independence, and Great Britain might not be so great anymore. The countries are splitting apart, arguing and fighting against each other. It is not as united as it once was. Especially Scotland has many times tried to become an independent country... Kjøp tilgang for å lese mer Allerede medlem? Logg inn