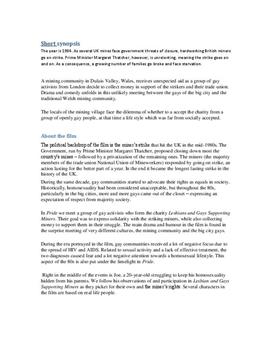 "What does it mean to strike?"

"What is a trade union? What were the most important trade unions during the miners strikes in the 1980s called?"

"Why do you think homosexuality is still hard to accept by many individuals or even larger communities"?

This is a very good text! You present your views and oppinions in a structured and elequent way with a good understanding of both the historical era and the film itself. There are some minor issues with the language, in some cases you need to clarify your sentences, but over all good grammar and a varied language. Great job!

The year is 1984. As several UK mines face government threats of closure, hardworking British miners go on strike. Prime Minister Margaret Thatcher, however, is unrelenting, meaning the strike goes on and on. As a consequence, a growing number of families go broke and face starvation.

In Pride we meet a group of gay activists who form the charity Lesbians and Gays Supporting Miners. Their goal was to express solidarity with the striking miners, while also collecting money to support them in their struggle. The main drama and humour in the film is found in the surprise meeting of very different cultures, the mining community and the big city gays.

During the era portrayed in the film, gay communities received a lot of negative focus due to the spread of HIV and AIDS. Related to sexual activity and a lack of effective treatment, the two diagnoses caused fear and a lot negative attention towards a homosexual lifestyle. This aspect of the 80s is also put under the limelight in Pride.

Right in the middle of the events is Joe, a 20-year-old struggling to keep his homosexuality hidden from his parents. We follow his observations of and participation in Lesbian and Gays Supporting Miners as they picket for their own and the miner's rights... Kjøp tilgang for å lese mer Allerede medlem? Logg inn