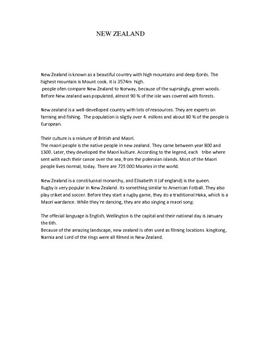 New Zealand is known as a beautiful country with high mountains and deep fjords. The highest mountain is Mount cook. It is 3574m high.
people ofen compare New Zealand to Norway, because of the suprsingly, green woods.
Before New zealand was populated, almost 90 % of the isle was covered with forests.

New zealand is a well-develloped country with lots of reasources. They are experts on farming and fishing. The population is sligtly over 4. millons and about 80 % of the people is European.

Their culture is a mixture of British and Maori.
The maori people is the native people in new zealand. They came between year 800 and 1300. Later, they developed the Maori kulture. According to the legend, each tribe where sent with each their canoe over the sea, from the polensian islands. Most of the Maori... Kjøp tilgang for å lese mer Allerede medlem? Logg inn