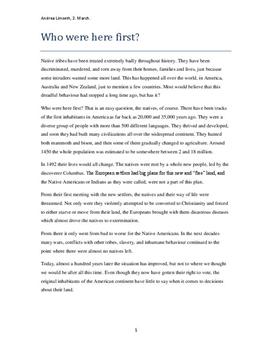 "Who were here first?
Native tribes have been treated extremely badly throughout history.

They have been discriminated, murdered, and torn away from their homes, families and lives, just because some intruders wanted some more land.

This has happened all over the world, in America, Australia and New Zealand, just to mention a few countries. Most would believe that this dreadful behaviour had stopped a long time ago, but has it?

Who were here first? That is an easy question, the natives, of course. There have been tracks of the first inhabitants in America as far back as 20,000 and 35,000 years ago."... Kjøp tilgang for å lese mer Allerede medlem? Logg inn