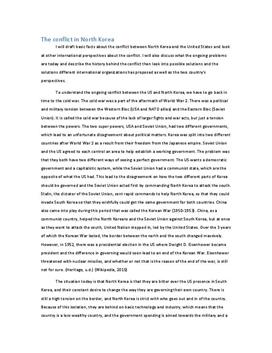 To understand the ongoing conflict between the US and North Korea, we have to go back in time to the cold war. The cold war was a part of the aftermath of World War 2. There was a political and military tension between the Western Bloc (USA and NATO allies) and the Eastern Bloc (Soviet Union). It is called the cold war because of the lack of larger fights and war acts, but just a tension between the powers. The two super powers, USA and Soviet Union, had two different governments, which lead to an unfortunate disagreement about political matters. Korea was split into two different countries after World War 2 as a result from their freedom from the Japanese empire. Soviet Union and the US agreed to each control an area to help establish a working government. The problem was that they both have two different ways of seeing a perfect government... Kjøp tilgang for å lese mer Allerede medlem? Logg inn