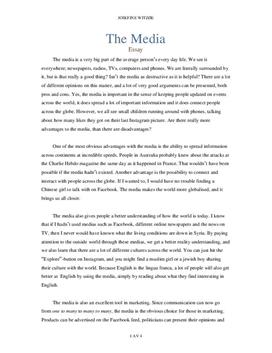 The media is a very big part of the average person's every day life. We see it everywhere; newspapers, radios, TVs, computers and phones. We are literally surrounded by it, but is that really a good thing? Isn't the media as destructive as it is helpful? There are a lot of different opinions on this matter, and a lot of very good arguments can be presented, both pros and cons. Yes, the media is important in the sense of keeping people updated on events across the world, it does spread a lot of important information and it does connect people across the globe. However, we all see small children running around with phones, talking about how many likes they got on their last Instagram picture. Are there really more advantages to the media, than there are disadvantages?

One of the most obvious advantages with the media is the ability to spread information across continents at incredible speeds. People in Australia probably knew about the attacks at the Charlie Hebdo magazine the same day as it happened in France. That wouldn't have been possible if the media hadn't existed. Another advantage is the possibility to connect and interact with people across the globe. If I wanted to, I would have no trouble finding a Chinese girl to talk with on Facebook. The media makes the world more globalised, and it brings us all closer... Kjøp tilgang for å lese mer Allerede medlem? Logg inn