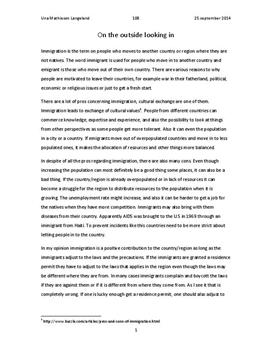 Immigration is the term on people who moves to another country or region where they are not natives. The word immigrant is used for people who move in to another country and emigrant is those who move out of their own country. There are various reasons to why people are motivated to leave their countries, for example war in their fatherland, political, economic or religious issues or just to get a fresh start.

There are a lot of pros concerning immigration, cultural exchange are one of them. Immigration leads to exchange of cultural values . People from different countries can commerce knowledge, expertise and experience, and also the possibility to look at things from other perspectives as some people get more tolerant. Also it can even the population in a city or a country. If emigrants move out of overpopulated countries and move in to less populated ones, it makes the allocation of resources and other things more balanced... Kjøp tilgang for å lese mer Allerede medlem? Logg inn