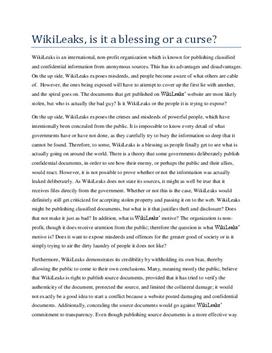 Oppgavetekst:
WikiLeaks is a media phenomenon that releases confidential information into the public domain against the wishes of governments and others.
Using the quotes below as your point of departure, write an essay in which you discuss the arguments for and against WikiLeaks.
“WikiLeaks is a true blessing. Finally we get to see what is really going on in the corridors of power.”
“WikiLeaks is information given totally out of context and spread around the world without accountability. It will cause serious problems for international diplomacy.”

Your text is insightful, intelligent and well-formulated. Your language is definitely advanced, perhaps a little too much at times, and this could be controlled by sometimes, esp. when you write about something that is difficult, writing sentences that are a little shorter. All in all – very well done!

WikiLeaks, is it a blessing or a curse?

WikiLeaks is an international, non-profit organization which is known for publishing classified and confidential information from anonymous sources. This has its advantages and disadvantages. On the up side, WikiLeaks exposes misdeeds, and people become aware of what others are cable of.

However, the ones being exposed will have to attempt to cover up the first lie with another, and the spiral goes on. The documents that get published on WikiLeaks’ website are most likely stolen, but who is actually the bad guy? Is it WikiLeaks or the people it is trying to expose?
... Kjøp tilgang for å lese mer Allerede medlem? Logg inn