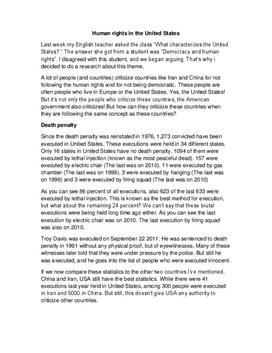 I disagreed with this student, and we began arguing. That’s why i decided to do a research about this theme.

A lot of people (and countries) criticize countries like Iran and China for not following the human rights and for not being democratic. These people are often people who live in Europe or the United States."... Kjøp tilgang for å lese mer Allerede medlem? Logg inn