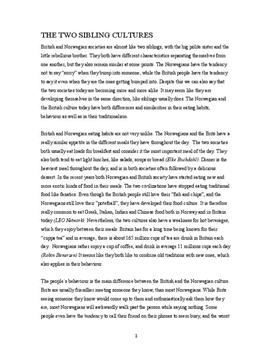 British and Norwegian societies are almost like two siblings, with the big polite sister and the little rebellious brother. They both have different characteristics separating themselves from one another, but they also remain similar at some points. The Norwegians have the tendency not to say “sorry” when they bump into someone, while the British people have the tendency to say it even when they are the ones getting bumped into. Despite this we can also say that the two societies today are becoming more and more alike. It may seem like they are developing themselves in the same direction, like siblings usually does. The Norwegian and the British culture today have both differences and similarities in their eating habits, behaviour as well as in their traditionalism.

British and Norwegian eating habits are not very unlike. The Norwegians and the Brits have a really similar appetite in the different meals they have throughout the day. The two societies both usually eat loads for breakfast and consider it the most important meal of the day. They also both tend to eat light lunches, like salads, soups or bread (Ellie Buchdahl). Dinner is the heaviest meal throughout the day, and is in both societies often followed by a delicious dessert... Kjøp tilgang for å lese mer Allerede medlem? Logg inn