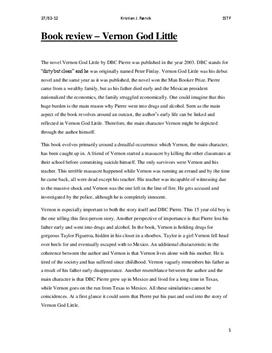 The novel Vernon God Little by DBC Pierre was published in the year 2003. DBC stands for “dirty but clean” and he was originally named Peter Finlay.

Vernon God Little was his debut novel and the same year as it was published, the novel won the Man Booker Prize. Pierre came from a wealthy family, but as his father died early and the Mexican president nationalized the economics, the family struggled economically.

One could imagine that this huge burden is the main reason why Pierre went into drugs and alcohol. Seen as the main aspect of the book revolves around an outcast, the author’s early life can be linked and reflected in Vernon God Little. Therefore, the main character Vernon might be depicted through the author himself."... Kjøp tilgang for å lese mer Allerede medlem? Logg inn