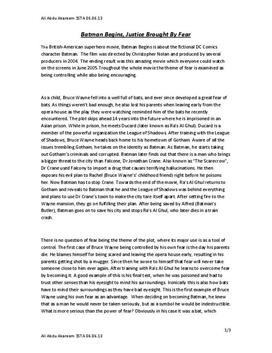 The British-American superhero movie, Batman Begins is about the fictional DC Comics character Batman. The film was directed by Christopher Nolan and produced by several producers in 2004. The ending result was this amazing movie which everyone could watch on the screens in June 2005.Troughout the whole movie the theme of fear is examined as being controlling while also being encouraging.

As a child, Bruce Wayne fell into a well full of bats, and ever since developed a great fear of bats. As things weren't bad enough, he also lost his parents when leaving early from the opera house as the play they were watching reminded him of the bats he recently encountered. The plot skips ahead 14 years into the future where he is imprisoned in an Asian prison. While in prison, he meets Ducard (later known as Ra's Al Ghul). Ducard is a member of the powerful organization the League of Shadows. After training with the League of Shadows, Bruce Wayne heads back home to his hometown of Gotham. Aware of all the issues trembling Gotham, he takes on the identity as Batman. As Batman, he starts taking out Gotham's criminals and corrupted. Batman later finds out that there is a man who brings a bigger threat to the city than Falcone, Dr Jonathan Crane. Also known as “The Scarecrow”, Dr Crane used Falcony to import a drug that causes terrifying hallucinations... Kjøp tilgang for å lese mer Allerede medlem? Logg inn