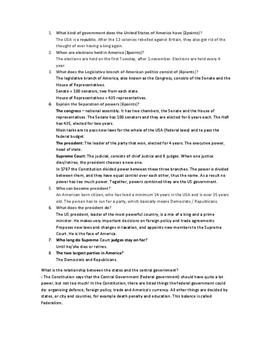 1. What kind of government does the United States of America have (2points)?
The USA is a republic. After the 13 colonies rebelled against Britain, they also got rid of the thought of ever having a king again.
2. When are elections held in America (3points)?
The elections are held on the first Tuesday, after 1.november. Elections are held every 4 year.
3. What does the Legislative branch of American politics consist of (4pionts)?
The legislative branch of America, also known as the Congress, consists of the Senate and the House of Representatives.
Senate = 100 senators, two from each state.
House of Representatives = 435 representatives.
Explain the Separation of powers (6points)?
The congress – national assembly. It has two chambers, the Senate and the House of representatives. The Senate has 100 senators and they are elected for 6 years each. The HoR has 435, elected for two years.
Main tasks are to pass new laws for the whole of the USA (federal laws) and to pass the federal budget... Kjøp tilgang for å lese mer Allerede medlem? Logg inn