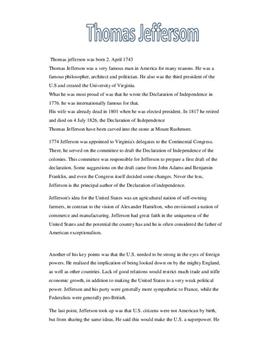 Thomas jefferson was born 2. April 1743
Thomas Jefferson was a very famous man in America for many reasons. He was a famous philosopher, architect and politician. He also was the third president of the U.S and created the University of Virginia.
What he was most proud of was that he wrote the Declaration of Independence in 1776. he was internationally famous for that.
His wife was already dead in 1801 when he was elected president. In 1817 he retired and died on 4 July 1826, the Declaration of Independence
Thomas Jefferson have been carved into the stone at Mount Rushmore.

1774 Jefferson was appointed to Virginia's delegates to the Continental Congress. There, he served on the committee to draft the Declaration of Independence of the colonies. This committee was responsible for Jefferson to prepare a first draft of the... Kjøp tilgang for å lese mer Allerede medlem? Logg inn