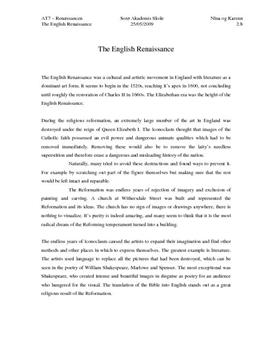 The English Renaissance was a cultural and artistic movement in England with literature as a dominant art form. It seems to begin in the 1520s, reaching it’s apex in 1600, not concluding until roughly the restoration of Charles II in 1660s. The Elizabethan era was the height of the English Renaissance.

During the religious reformation, an extremely large number of the art in England was destroyed under the reign of Queen Elizabeth I. The iconoclasts thought that images of the Catholic faith... Kjøp tilgang for å lese mer Allerede medlem? Logg inn