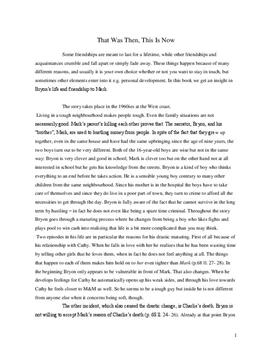 Novelleanalyse: That Was Then, This Is Now | Analyse

Analyse av boken "That Was Then, This Is Now" skrevet av S. E. Hinton.

Some friendships are meant to last for a lifetime, while other friendships and acquaintances crumble and fall apart or simply fade away. These things happen because of many different reasons, and usually it is your own choice whether or not you want to stay in touch, but sometimes other elements enter into it e.g. personal development. In this book we get an insight in Bryon's life and friendship to Mark.

The story takes place in the 1960ies at the West coast.
Living in a tough neighbourhood makes people tough. Even the family situations are not necessarily good. Mark's parent's killing each other proves that. The narrator, Bryon, and his “brother”, Mark, are used to hustling money from people. In spite of the fact that they grew up together, even in the same house and have had the same upbringing since the age of nine years, the two boys turn out to be very different. Both of the 16-year-old boys are wise but not in the same way: Bryon is very clever and good in school; Mark is clever too but on the other hand not at all interested in school but he gets his knowledge from the streets... Kjøp tilgang for å lese mer Allerede medlem? Logg inn

Brukere som har lastet ned That Was Then, This Is Now | Analyse, har også lastet ned