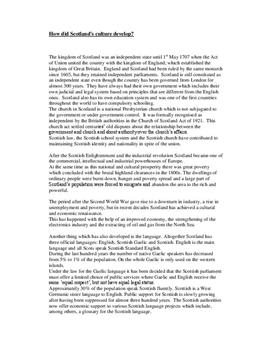 How did Scotland's culture develop?

Scotland is still constituted as an independent state even though the country has been governed from London for almost 300 years. They have always had their own government which includes their own judicial and legal system based on principles that are different from the English ones... Kjøp tilgang for å lese mer Allerede medlem? Logg inn