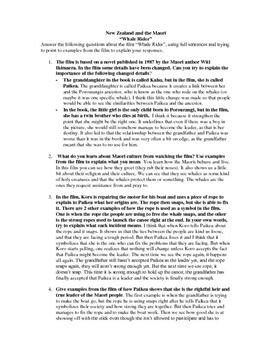 New Zealand and the Maori (based on Whale Rider)

Answer the following questions about the film “Whale Rider”, using full sentences and trying to point to examples from the film to explain your responses.

1. The film is based on a novel published in 1987 by the Maori author Witi Ihimaera. In the film some details have been changed. Can you try to explain the importance of the following changed details?

2. What do you learn about Maori culture from watching the film? Use examples from the film to explain what you mean.

3. In the film, Koro is repairing the motor for his boat and uses a piece of rope to explain to Paikea what her origins are. The rope then snaps, but she is able to fix it. There are 2 other examples of how the rope is used as a symbol in the film. One is when the rope the people are using to free the whale snaps, and the other is the strong ropes used to launch the canoe right at the end. In your own words, try to explain what each incident means

4. Give examples from the film of how Paikea shows that she is the rightful heir and true leader of the Maori people

5. How many characters can you think of in the film, which are not Maori? What is your reaction to this?

6. In the film review which you were given to read, the journalist comments that “the traditions of eastern New Zealand's contemporary Whangara tribe are challenged by economic decline and cultural evolution”. What evidence can you see in the film to support this view?