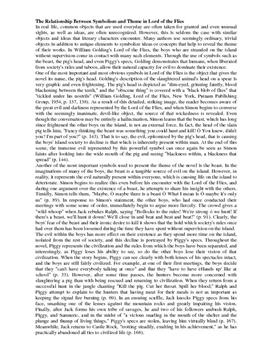 Another of the most important symbols used to present the theme of the novel is the beast. In the imaginations of many of the boys, the beast is a tangible source of evil on the island. However, in reality, it represents the evil naturally present within everyone, which is causing life on the island to deteriorate. Simon begins to realize this even before his encounter with the Lord of the Flies, and during one argument over the existence of a beast, he attempts to share his insight with the others... Kjøp tilgang for å lese mer Allerede medlem? Logg inn