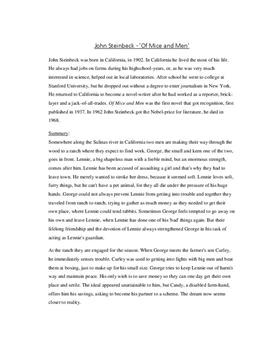 Romananalyse: Analysis: "Of Mice and Men" by John Steinbeck

This paper is an analysis in English of the novel "Of Mice and Men", written by John Steinbeck. The assignment includes a summary and an analysis of the literary construction, characters and themes of the novel.

Somewhere along the Salinas river in California two men are making their way through the wood to a ranch where they expect to find work. George, the small and keen one of the two, goes in front. Lennie, a big shapeless man with a feeble mind, but an enormous strength, comes after him. Lennie has been accused of assaulting a girl and that's why they had to leave town. He merely wanted to stroke her dress, because it seemed soft. Lennie loves soft, furry things, but he can't have a pet animal, for they all die under the pressure of his huge hands. George could not always prevent Lennie from getting into trouble and together they traveled from ranch to ranch, trying to gather as much money as they needed to get their own place, where Lennie could tend rabbits. Sometimes George feels tempted to go away on his own and leave Lennie, when Lennie has done one of his 'bad' things again. But their... Kjøp tilgang for å lese mer Allerede medlem? Logg inn