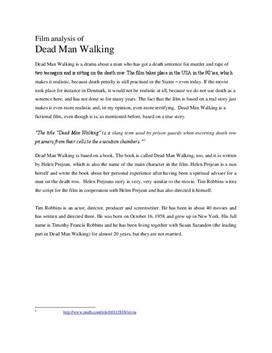 Dead Man Walking is a drama about a man who has got a death sentence for murder and rape of two teenagers and is sitting on the death row. The film takes place in the USA in the 90'ies, which makes it realistic, because death penalty is still practised in the States – even today. If the movie took place for instance in Denmark, it would not be realistic at all, because we do not use death as a sentence here, and has not done so for many years. The fact that the film is based on a real story just makes it even more realistic and, in my opinion, even more terrifying. Dead Man Walking is a fictional film, even though it is, as mentioned before, based on a true story.

“The title "Dead Man Walking" is a slang term used by prison guards when escorting death row prisoners from their cells to the execution chambers.”

Dead Man Walking is based on a book. The book is called Dead Man Walking, too, and it is written by Helen Prejean, which is also the name of the main character in the film. Helen Prejean is a nun herself and wrote the book about her personal experience after having been a spiritual adviser for a... Kjøp tilgang for å lese mer Allerede medlem? Logg inn