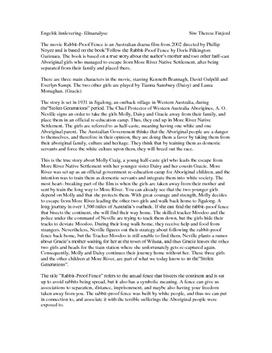 The movie Rabbit-Proof Fence is an Australian drama film from 2002 directed by Phillip Noyce and is based on the book”Follow the Rabbit-Proof Fence by Doris Pilkington Garimara. The book is based on a true story about the author's mother and two other half-cast Aboriginal girls who managed to escape from More River Native Settlement, after being separated from their family and placed there.

There are three main characters in the movie, starring Kenneth Brannagh, David Gulpilil and Everlyn Sampi. The two other girls are played by Tianna Sansbury (Daisy) and Laura Monaghan. (Gracie)

The story is set in 1931 in Jigalong, an outback village in Western Australia, during the”Stolen Generations” period. The Chief Protector of Western Australia Aborigines, A. O. Neville signs an order to take the girls Molly, Daisy and Gracie away from their family, and place them in an official re-education camp.
... Kjøp tilgang for å lese mer Allerede medlem? Logg inn