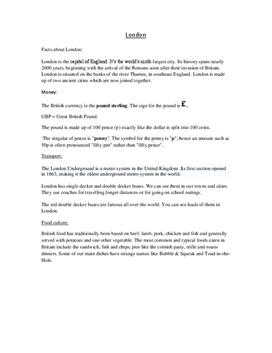 Facts about London:
London is the capital of England. It's the world's ninth-largest city. Its history spans nearly 2000 years, beginning with the arrival of the Romans soon after their invasion of Britain. London is situated on the banks of the river Thames, in southeast England. London is made up of two ancient cities which are now joined together.
Money:
The British currency is the pound sterling. The sign for the pound is .
GBP = Great British Pound.
The pound is made up of 100 pence (p) exactly like the dollar is split into 100 cents.
The singular of pence is "penny". The symbol for the penny is "p"; hence an amount such as 50p is often pronounced "fifty pee" rather than "fifty pence".
Transport:
The London Underground is a metro system in the United Kingdom .Its first section opened in 1863, making it the oldest underground metro system in the world... Kjøp tilgang for å lese mer Allerede medlem? Logg inn