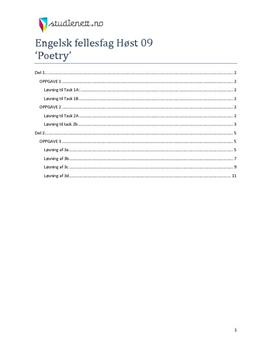 Task A
Write a text where you present and discuss some songs and/or poems that you feel have an important message. Feel free to use examples from other relevant English-language literary texts to support your arguments.

Task B. Use the song “Superman” by The Kinks (Vedlegg 2) as the basis for an article about social pressure and feelings of personal inadequacy. Use quotations from the song to illustrate your views. Feel free to mention other relevant English-language literary texts.

Task C: Write a text where you discuss Sarah's and Boris' views and present your own. Feel free to use examples from other relevant English-language literary texts to support your arguments.

Task D: Use “Superman” as the basis for an article where you discuss this statement. Use examples from “Superman” and other English-language literary texts you have studied to illustrate your views.

Løsning til Task 1B
According to Boris Johnson the English are the best in the world at composing great poetry. He believes this ability stems from the fact that children early on are taught to recite poems and memorize them by heart. This was something he himself experienced when he went to school and something he believes the youth of today should learn as well. The ability to create great poetry is passed on from generation to generation and therefore is an inheritance that we should take care of. Johnson fears that this inheritance is slowly disappearing. The critics say that learning to recite poetry written by long gone old white men is useless, but Johnson disagrees. He doesn't care (give a flying fig), because in the contest, or kulturkampf as Johnson calls it, he argues that England should do what England do best, and that is passing on the ability to create great poetry.

3A -
Words as weapons
Songs and poetry are excellent tools to express our most inner feelings. These interwoven and complex texts often help us express difficult and strong emotions better than mere words are able to. This is also why songs and poetry often are used to express political messages, social views and personal opinions and in many cases help to speed up a change in society. Especially protest songs and poetry are both ways of sharing a common discontent with the state of things. Especially in the four tees, fifties and sixties protest songs and poems were used by Afro Americans and their peers in the United States to show their dissatisfaction with the way things were going. Afro Americans had been oppressed ever since they stepped foot on American soil in the sixteen hundreds, even though, they were declared free by congress in 1865 with the phrase,... Kjøp tilgang for å lese mer Allerede medlem? Logg inn