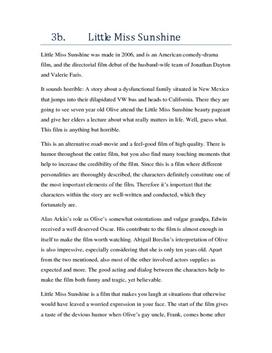 Little Miss Sunshine was made in 2006, and is an American comedy-drama film, and the directorial film debut of the husband-wife team of Jonathan Dayton and Valerie Faris.
It sounds horrible: A story about a dysfunctional family situated in New Mexico that jumps into their dilapidated VW bus and heads to California.

There they are going to see seven year old Olive attend the Little Miss Sunshine beauty pageant and give her elders a lecture about what really matters in life. Well, guess what. This film is anything but horrible... Kjøp tilgang for å lese mer Allerede medlem? Logg inn