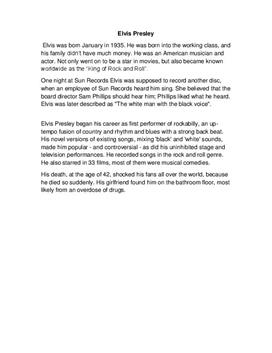 Elvis was born January in 1935. He was born into the working class, and his family didn't have much money. He was an American musician and actor. Not only went on to be a star in movies, but also became known worldwide as the “King of Rock and Roll”.
One night at Sun Records Elvis was supposed to record another disc, when an employee of Sun Records heard him sing. She believed that the board director Sam Phillips should hear him; Phillips liked what he heard. Elvis was later described as "The white man with the black voice".

Elvis Presley began his career as first performer of rockabilly, an up-tempo fusion of country and rhythm and blues with a strong back beat. His novel versions of existing songs, mixing 'black' and 'white' sounds, made him popular - and controversial - as did his uninhibited stage and... Kjøp tilgang for å lese mer Allerede medlem? Logg inn