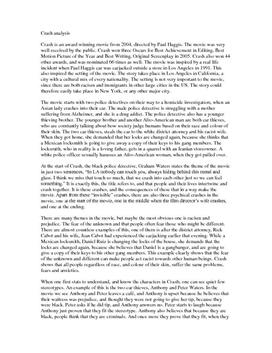 Crash is an award winning movie from 2004, directed by Paul Haggis. The movie was very well received by the public. Crash won three Oscars for Best Achievement in Editing, Best Motion Picture of the Year and Best Writing, Original Screenplay in 2005. Crash also won 44 other awards, and was nominated 66 times as well. The movie was inspired by a real life incident when Paul Haggis car was carjacked outside a store in Los Angeles in 1991. This also inspired the setting of the movie. The story takes place in Los Angeles in California, a city with a cultural mix of every nationality. The setting is not very important to the movie, since there are both racism and immigrants in other large cities in the US. The story could therefore easily take place in New York, or any other major city.

The movie starts with two police detectives on their way to a homicide investigation, when an Asian lady crashes into... Kjøp tilgang for å lese mer Allerede medlem? Logg inn