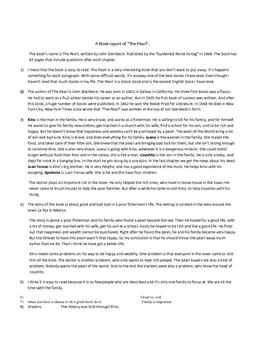 A Book report of “The Pearl”.

The book's name is The Pearl, written by John Steinbeck. Published by the “Gyldendal Norsk Forlag” in 1968. The book has 93 pages that include questions after each chapter.

1) I mean that the book is easy to read. The Pearl is a very interesting book that you don't want to put away. It's happens something for each paragraph. With some difficult words, it's anyway one of the best books I have read. Even though I haven't read that much books in my life. The Pearl is a classic book and is the easiest English book I have read.

2) The author of The Pearl is John Steinbeck. He was born in 1902 in Salinas in California. His three first books was a fiasco. He had to work as a fruit picker beside his career as an author. But in 1935 his first book of success was written. And after this book, a huge number of books were published. In 1962 he won the Nobel Prize for Literature. In 1968 he died in New York City. New York Times once wrote that “The Pearl” was written at the top of Jon Steinbeck's form... Kjøp tilgang for å lese mer Allerede medlem? Logg inn