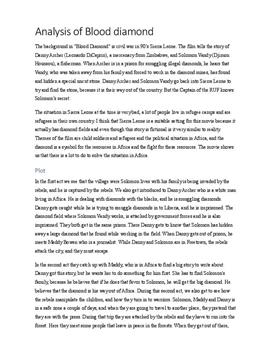 The background in "Blood Diamond" is civil war in 90's Sierra Leone. The film tells the story of Danny Archer (Leonardo DiCaprio), a mercenary from Zimbabwe, and Solomon Vandy (Djimon Hounsou), a fisherman. When Archer is in a prison for smuggling illegal diamonds, he hears that Vandy, who was taken away from his family and forced to work in the diamond mines, has found and hidden a special uncut stone. Danny Archer and Solomon Vandy go back into Sierra Leone to try and find the stone, because it is their way out of the country. But the Captain of the RUF knows Solomon's secret.
The situation in Sierra Leone at the time is very bad, a lot of people live in refugee camps and are refugees in their own country. I think that Sierra Leone is a suitable setting for this movie because it actually has diamond fields and even though this story is fictional is it very similar to reality. Themes of the film are child soldiers and refugees and the political situation in Africa, and the diamond is a symbol for the resources in Africa and the fight for these resources. The movie shows us that ... Kjøp tilgang for å lese mer Allerede medlem? Logg inn