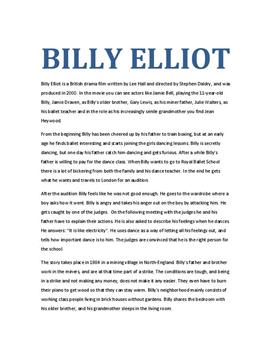 Billy Elliot is a British drama film written by Lee Hall and directed by Stephen Daldry, and was produced in 2000. In the movie you can see actors like Jamie Bell, playing the 11-year-old Billy, Jamie Draven, as Billy's older brother, Gary Lewis, as his miner father, Julie Walters, as his ballet teacher and in the role as his increasingly senile grandmother you find Jean Heywood.
From the beginning Billy has been cheered up by his father to train boxing, but at an early age he finds ballet interesting and starts joining the girls dancing lessons. Billy is secretly dancing, but one day his father catch him dancing and gets furious. After a while Billy's father is willing to pay for the dance class. When Billy wants to go to Royal Ballet School there is a lot of bickering from both the family and his dance teacher. In the end he gets what he wants and travels to London for an audition.
After the audition Billy feels like he was not good enough. He goes to the wardrobe where a boy asks how it went. Billy is angry and takes his anger out on the boy by attacking him. He gets caught by one of the judges. On the following meeting with the judges he and his father have to explain their actions. He is also asked to describe his feelings when he... Kjøp tilgang for å lese mer Allerede medlem? Logg inn