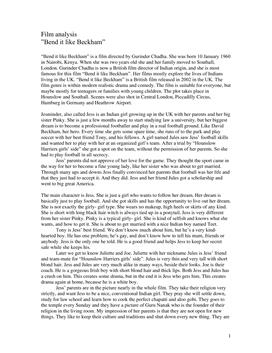 Bend it like Beckham” is a film directed by Gurinder Chadha. She was born 10 January 1960 in Nairobi, Kenya. When she was two years old she and her family moved to Southall, London. Gurinder Chadha is now a British film director of Indian origin, and she is most famous for this film “Bend it like Beckham”. Her films mostly explore the lives of Indians living in the UK. “Bend it like Beckham” is a British film released in 2002 in the UK. The film genre is within modern realistic drama and comedy. The film is suitable for everyone, but maybe mostly for teenagers or families with young children. The plot takes place in Hounslow and Southall. Scenes were also shot in Central London, Piccadilly Circus, Hamburg in Germany and Heathrow Airport.

Jesminder, also called Jess is an Indian girl growing up in the UK with her parents and her big sister Pinky.
... Kjøp tilgang for å lese mer Allerede medlem? Logg inn