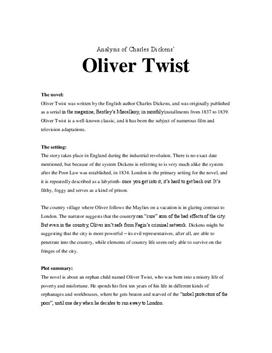 The novel:
Oliver Twist was written by the English author Charles Dickens, and was originally published as a serial in the magazine, Bentley's Miscellany, in monthly installments from 1837 to 1839. Oliver Twist is a well-known classic, and it has been the subject of numerous film and television adaptations.

The setting:
The story takes place in England during the industrial revolution. There is no exact date mentioned, but because of the system Dickens is referring to is very much alike the system after the Poor Law was established, in 1834. London is the primary setting for the novel, and it is repeatedly described as a labyrinth- once you get into it, it's hard to get back out. It's filthy, foggy and serves as a kind of prison... Kjøp tilgang for å lese mer Allerede medlem? Logg inn