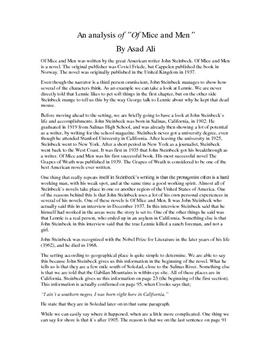 Of Mice and Men was written by the great American writer John Steinbeck. Of Mice and Men is a novel. The original publisher was Covici Friede, but Cappelen published the book in Norway. The novel was originally published in the United Kingdom in 1937.

Even though the narrator is a third person omniscient, John Steinbeck manages to show how several of the characters think. As an example we can take a look at Lennie. We are never directly told that Lennie likes to pet soft things in the first chapter, but on the other side Steinbeck mange to tell us this by the way George talk to Lennie about why he kept that dead mouse... Kjøp tilgang for å lese mer Allerede medlem? Logg inn