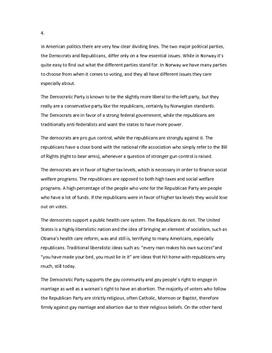 In American politics there are very few clear dividing lines. The two major political parties, the Democrats and Republicans, differ only on a few essential issues. While in Norway it's quite easy to find out what the different parties stand for. In Norway we have many parties to choose from when it comes to voting, and they all have different issues they care especially about.

The Democratic Party is known to be the slightly more liberal to-the-left party, but they really are a conservative party like the republicans, certainly by Norwegian standards. The Democrats are in favor of a strong federal government, while the republicans are traditionally anti-federalists and want the states to have more power... Kjøp tilgang for å lese mer Allerede medlem? Logg inn