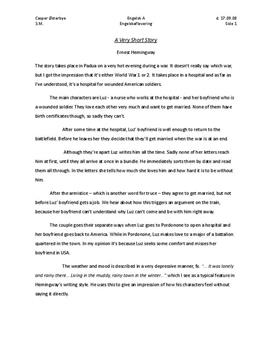 Ernest Hemingway
The story takes place in Padua on a very hot evening during a war. It doesn't really say which war, but I got the impression that it's either World War 1 or 2. It takes place in a hospital and as far as I've understood, it's a hospital for wounded American soldiers.
The main characters are Luz - a nurse who works at the hospital - and her boyfriend who is a wounded soldier. They love each other very much and want to get married. None of them have birth certificates though, so sadly they can't.
After some time at the hospital, Luz' boyfriend is well enough to return to the battlefield. Before he leaves her they decide that they'll get married when the war is at an end... Kjøp tilgang for å lese mer Allerede medlem? Logg inn